The robot is a costume in Costume Quest.

When not in battle, the costume appears to be made of cardboard and tin foil. The helmet is cylindrical and has an antenna with a red ball attached to the top. The torso is square and has buttons painted on it. The sleeves and leggings are made of tin foil, while the shoes are roller skates.

When in battle, it looks like a blue robot with a chest armed with three bazookas. It has wings and on its head is a red dot for an eye. Some parts of the body are silver, such as on its arms, legs, and head. 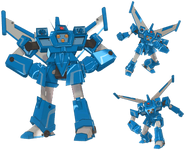 Add a photo to this gallery

Retrieved from "https://costumequest.fandom.com/wiki/Robot?oldid=5908"
Community content is available under CC-BY-SA unless otherwise noted.